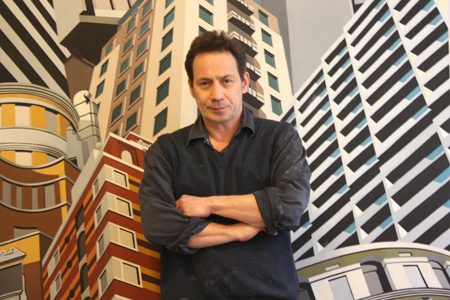 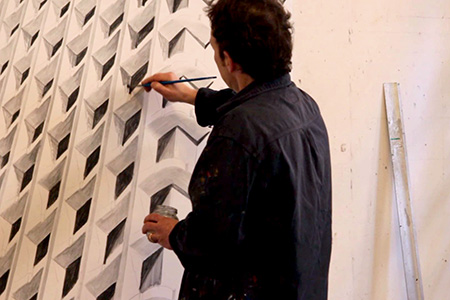 Marco Petrus was born in Rimini in 1960, but from his earliest childhood he lived with his family in Milan. The son of an artist – his father, Vitale Petrus (Kiev 1934 – Milan 1984) was a leader of the Lombard art scene in the 1960s and 1970s – from a very early age he was interested in architecture, and paid particular attention to that in Milan from the 1930s and 1940s, besides being interested in experiments with printing and art reproduction techniques.
He gained a diploma after following a course for a graphics assistant from the Umanitaria institute in 1980, and graduated from the arts secondary school in 1984, the same year in which he registered at the architectural faculty of the Milan polytechnic, where he studied for a brief period. On the death of his father he opened an art printing house which was to become a place for meeting and getting to know other artists, a prelude to his debut as a painter in 1991with his first solo show in Milan.

The paintings from his first period are characterised by a strongly marked and insistent use of line, the legacy of his training and experience as an engraver. In these works, however, we can already see the almost metaphysical immobility of the architecture that was later on to characterise his work, almost like a constant “trademark”. From the very start he showed a great interest in architecture, in particular that of Milan, and above all its “archetypal-mythological” aspect in the 1930s and 1940s which were also a basic and anticipatory premise of what were to be the extraordinary developments in the city planning of Milan in successive decades.

With the passing of time, his lines became less and less marked and left space for an increasingly rigorous and linear play of colours, articulated by light and well-defined lines and fields of flat paint, part of a search for the concision and linearity of composition that increasingly characterised his art.

From the end of the 1990s to the beginning of the 2000s, Marco Petrus’ painting underwent a new line of development. He enlarged his analytical gaze, on the one hand, to inquire in an increasingly rigorous manner into the structure itself of urban and architectural forms, to arrive at the point of collaborating with architectural institutes and faculties in various countries; on the other hand, he came to embrace, through his strongly characterised view of things, recent and less recent urban forms of many European, American, and Asiatic cities and megalopolises, almost as though he were tracing out a multifaceted map of the infinite forms of architecture existing in the world. And so his work seems at times to take on the aspect of a rational summation of all the possible types of town planning, which he revisits through his particular pictorial style as an artist.

His most recent development has led him, in an increasing stylisation of form, first to flank his urban portrayals with their “counterparts” at an abstract level (lines, marks and simple coloured patches where there had previously been perspectives, angles, and windows), and then to “freeze” the very form of the urban landscape in a pure game of abstract stylisations.

In this way his painting, with its increasing analysis of the “space” of form, starting from the icons of contemporary landscape, has also progressively changed his own art language and formal approach to the canvas; he has slowly freed himself from a simple, figurative re-statement of elements and views of the urban landscape to become, instead, a rigorous and impeccable researcher into architectonic “pure form”.

In this way, his work of analysing the original form has become the pretext for a far wider research into the very meaning of painting and representation.

“The cities of Petrus and hence his painting are also grounded on a principle of balance, attained by the artist through the marked formal concentration that has enabled him to develop an intransigent pictorial canon. He has thus transformed the system of representation into a method of investigation of thought rather than a virtuoso exhibition of truth (or verisimilitude).”

“What Marco Petrus “designs” is actually a way of looking at things, and in that sense his is prevalently the study of a formal structure: form is indeed what the material causes to appear in the first place. For Petrus form is the “how” of the material, and the material is the “what” of the form, so the artwork is a way of conferring a form onto the material and making it appear thus and not in any other way. Certainly not how it “really” is. Perhaps we are already skirting the boundary that separates science from sci-fi fantasy. But does this boundary exist?”

“I see Petrus as an absolutely contemporary character, with a future projection that seems to me to be able to carry on like this for a long time yet, because his aim is not, as a planning architect, to create a project, which has nowadays to express itself in a different manner, archaically. He works like a painter, meaning as a person who perceives things with a brush and canvas, and his are maybe even slightly obsessive interpretations – because there is obsession within this fixity – of a world where these architectural elements are souls, deprived of people. It is here that I would almost draw an analogy with Morandi. This is a Zen, auto-therapeutic operation: standing in isolation, facing a canvas, the windows or the walls. The subject that he goes looking for, and with which he in some sense falls in love, becomes a message for he himself to discover when he brings it onto the canvas. I believe that those are things that bring enormous satisfaction, because they never do become formulae; they are not formulae. Like Morandi, who didn’t create a formula, faced with five bottles for his entire life. You have to be a magician to do that.”

“Marco Petrus has a surprisingly original glaze, an original point of view, refined over the course of twenty years and characterised precisely by a creative process that involves reducing elements to their essence. From the beginning, his paintings has focused on the representation of building from the first half of the 20th century: buildings stripped of their flesh, reduced to the essence of their geometric forms, simulacra of a world and a culture to which they stand in solid testimony.Seemingly lifeless constuctions, perhaps not even buildings to dwell in, yet perfect containers for the Nothingness of our times. The light striking them, reminiscent of the paintings of Edward Hopper, glazes them with an inhuman abstaction. Petrus is, in fact, an innovative follower of the great American painter.”

“Starting from Milan, Petrus has learned to recognize architecture in its planetary geography: to recognize how it belongs to the same family album. From the material plane he has therefor led it back to the conceptual: he has separated it from the context. He has displaced it all the better to recognize the way it belongs to a universal idea. For this purpose he has stopped the hands of the clock, as in de Chirico’s piazzas of Italy, freezing them in the perilous landscape between physics and metaphysics.
Like a painter of icons, Petrus believes, in short, in the salvational value of architecture, a source of mystery and worship. Year after year, journey after journey, he collects from around the world elements to be added to his naturalist’s notebook. Then, in his studio, he takes them from the cases of paper where he has composed their memory and sets them circulating in the great work of his mission as a painter of the sacred: the construction of a virtual iconostasis behind which to celebrate the mystery of the eternal occurrence of Architecture.”

“There are painters who paint and painters who build: artistes-peintres, as the French say, and peintres-architectes.
Petrus belongs to this scond category. And not becouse he paints architecture, but becouse he constructs forms. Architecture, to be sure, is the theme in which his paintings has been identified, and the one where he has found his most necessary stylistic cipher, not to mention his symbolic world.”

“The artist’s research is carried out along the lines of stylisation, through a process of constant removal of elements from city chaos: thus coming to represent only “what is necessary” of the landscape – the symbolic subtle scaffolding of which a city is made and of which it feeds day after day. Petrus revisits Milan with the eye of someone who is not interested in gleaning anything but individual details, those corners and those views which, in their dry and rigorous solidity, contain on their own the very idea of the city, its most ancient and unchangeable essence.”